The Picture of Cool - Laurie Boris 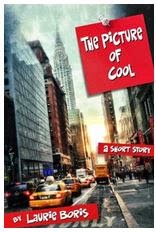 I admit it -- I'm a big fan of Laurie Boris's. And it's not just because we're both minions at Indies Unlimited, either. The woman can write.

The Picture of Cool is a short story featuring Charlie Trager, the brother of Adam Trager from Don't Tell Anyone. Charlie's latest romance -- you can't even really call it a subplot, it gets so little screen time -- gets a mention in that book. This is the story of how that relationship began.

Charlie works as a producer for a national daytime TV talk show. He meets Adam in the green room, just before Adam is to go on the show. There are sparks between the two men pretty much immediately, but Adam is married and there's a kid involved. The "how gay is he?" question only adds to the story's poignancy.

Charlie is a great guy -- the kind that women shake their heads in disappointment over when they find out which way he swings. You want things to work out between him and Adam. And when this story ended, I didn't want it to be over. To me, that's always a sign of a good tale. And I'm hoping we haven't heard the last of Charlie....
Posted by Lynne Cantwell at 6:00 PM

Email ThisBlogThis!Share to TwitterShare to FacebookShare to Pinterest
Labels: Don't Tell Anyone, Laurie Boris, review, The Picture of Cool