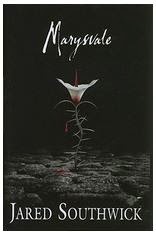 Marysvale is a YA horror story of sorts that's set in a fantasy world.

The setting is a frontier region similar to our Old West. The main character, John Casey, is a man with an odd gift: the ability to see into people's souls. That makes life difficult for him in this superstitious and suspicious culture. So John settles in some town for a little while, until the townspeople realize there's something odd about him, and then he moves on.

His latest escape leads him through a forest peopled by monsters -- creatures with the ability to track and hunt people. He escapes with his life, and arrives at an isolated farm where the owner, a middle-aged woman named Sarah, takes him in.

Then visitors arrive -- Jane, who is about John's age, and Jane's younger sister Hannah. They have come from the nearby town of Marysvale, where they live with their father. They used to live on a farm near Sarah's, but they fled after the monsters killed the girls' mother. As you might expect, John and Jane begin to fall for one another. But there is more to their relationship than young love, and the truth lies in the visions John has been having about his past -- a past he cannot remember.

Marysvale is the first in a trilogy. The book is well-edited, the plot moves along, and the monsters are well-conceived, although not overly gruesome. If you're looking for a YA fantasy with a bit of scary stuff, this book might be just the thing.
Posted by Lynne Cantwell at 4:41 PM