'Tis the season, as they say. I didn't mean to do a series of reviews of publications that would make great gifts, but then I ran across this. 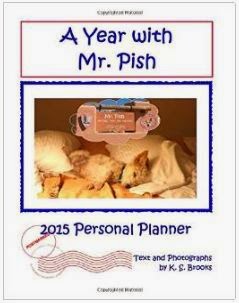 Mr. Pish is on a dual mission this holiday season. As usual, the adorable Jack Russell terrier on the road, educating kids about all the great things they can do outdoors -- just as he does in his popular "Postcards from Mr. Pish" series of children's books. But he also wants to help us all get organized in 2015. So his secretary-cook-chauffeur-and-who-knows-what-else, K.S. Brooks, has put together a desk-format planner featuring photos of the little guy. Each two-page spread consists of a monthly calendar on one side and shots of Mr. Pish at various U.S. national parks on the other.

The calendar squares are roomy enough for several entries apiece, and they feature important holidays, as well as some lesser-known observances. Did you know the first week of October is National Walk Your Dog Week? Neither did I, until Mr. Pish told me just now.

I had fun noting how many national parks Mr. Pish has visited -- although I was a little annoyed that he's been to some I haven't visited yet. Looks like my bucket list needs amending....

There's also a wall calendar version. If you have kids, or even if you just like little white dogs, you could do worse than keep track of your stuff next year with Mr. Pish along as your guide.