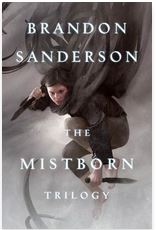 I love series box sets. When I've finished one book, I can just plunge ahead into the next one.

At Kevin's Watch, when we talk about the fantasy authors we like besides Stephen R. Donaldson, Brandon Sanderson's name always comes up, along with Steven Erikson, Robert Jordan (but only the first few Wheel of Time books), Patrick Rothfuss and, to a lesser extent, Patricia McKillip. And yet I've put off reading Mistborn until now.

Sanderson has created an original system of magic for this series. Basically, there are some people on this world who gain magical powers by ingesting certain metals. Each of the so-called Allomantic metals (of which there are eight, or more, depending on how far along in the story you are) provides a certain ability. And they come in pairs -- so burning Steel allows the Allomancer to push against other metals nearby, while burning Iron allows them to pull against them. Most Allomancers can burn only one metal, but a few -- known as Mistborn -- can burn them all.

They operate in a world where a single man, the Lord Ruler, has been in power for centuries. As befits all emperors, he rules over a societal system where the nobles live posh lives in grand homes in cities, or on plantations, and the skaa are virtual slaves who live in hopeless, grinding poverty. Supposedly, only nobles can be Allomancers -- but nobles tend to take the liberties with skaa that you'd expect, so Allomancy does turn up among the skaa.

In the first book, we're introduced to Kelsier, a Mistborn skaa who is already a legend as the only man who has ever escaped the Pits of Hathsin. Kelsier plans to overthrow the Lord Ruler, and he has gathered a team of thieves to help him. The team includes Vin, an orphaned girl who doesn't trust anybody. Kelsier figures out that she's Mistborn, and sets her up to masquerade as a noble girl from the country, so she can gather information by attending the nobles' balls. There, she meets Elend, the rebellious son of one of the most important noble families -- although Elend's rebellion takes the form of reading banned philosophical texts and wondering whether the skaa aren't just like nobles underneath. These three are the pivotal players in the revolution that Kelsier sets in motion.

Sanderson is a capable author, but the occasional problem slips through. At one point in the third book, Elend refers to three people Vin has murdered as a "homicidal hat trick." The line made me chuckle, but it also pulled me out of the story. Hat trick, after all, is a sports term for scoring three goals in a game, and nowhere in any of the books does anybody play a sport -- not even the nobility.

Anyway. This omnibus edition is not a quick read by any means, but it's well-written and enjoyable. If you like epic fantasy, I'd highly recommend the Mistborn Trilogy.
Posted by Lynne Cantwell at 6:00 PM