Then and Now: The Harmony of the Instantaneous All - Randy Attwood 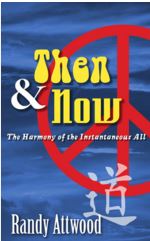 It's been said that if you remember the 1960s, you weren't really there. In Then and Now, Attwood captures the mood of that turbulent time with a protagonist who writes down his memories of his college years to try to make sense of them.

Stan Nelson is middle-aged now, but in 1969 he was a graduate student at the University of Kansas. As he pieces together his memories, his story's narration shifts viewpoint to various people he knew there. Among them: Peter Thomas, who staged and directed an avant-garde production of the Greek tragedy Oresteia in which Stan improbably landed a part; Melvin Washington, originally from Trinidad, who found himself as angry as any native-born American black man; Yen Li, the Chinese woman Stan fell for; Charlie Wilson, the drugged-out non-student; Betty Reed, who would rather live on a farm without electricity than spend another night under the roof of her father, a racist cop.

Interspersed with their stories are Stan's updates on how they turned out, and how their memories of the events of '69 and '70 compare with his. As for Stan himself, he has built a tea house on a hillside to learn the Tao of tea.

My own college experience began several years later, but I had very little trouble recognizing the character types. (We even had our own Charlie Wilson, in a way; the late Leon Varjian made a name for himself at my alma mater, Indiana University, before going on to become a legend at the University of Wisconsin at Madison.) The difference for us was that the draft was no longer hanging over the heads of male students.

Anyway. The episodic nature of the narrative gives the book a feeling of being a little rough around the edges. But then, the late '60s were like that. If you're interested in what it was really like back then -- or if you find yourself struggling to remember -- I'd recommend Then and Now.

(The author gave me a copy of this book without requesting a review. The decision to review it is mine alone.)
Posted by Lynne Cantwell at 6:05 PM

Email ThisBlogThis!Share to TwitterShare to FacebookShare to Pinterest
Labels: Randy Attwood, review, Then and Now