Pierced by the Sun - Laura Esquivel 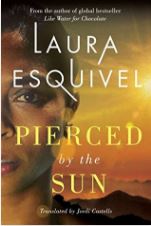 Laura Esquivel is best known as the author of Like Water for Chocolate. In her new book, Pierced by the Sun, the magic realism is less overt, but it's there nonetheless.

Lupita is a Mexican policewoman who witnesses the murder of a local politician in broad daylight on a city street. His death throws her back into the self-abusive practices she had used before -- drinking and drugs. At the same time, the local political machine marks her for death. She inadvertently escapes into the succor of indigenous spirituality, and in so doing, finds a way out -- not just for her personal dilemmas, but maybe for her nation, too.

Esquivel does a fine job weaving together the various threads that make up the tapestry of modern Mexico -- Catholicism and indigenous religion, political corruption and the drug trade, and people just trying to live their lives. The trope of the modern woman who finds her way again by adopting ancient ways is somewhat hackneyed, but at least the author doesn't make it the focus of the book. She does, however, have an overt agenda, or at least a moral to her story; it's clear that Lupita is a stand-in for Mexico herself, as evidenced by the story's final sentence:


Most importantly, if Lupita -- who had collected so much pain, who had experienced so much anger -- could heal and connect to The Whole, so could Mexico.

I picked up Pierced by the Sun for free as part of Amazon's Kindle First program. If you're looking for another Like Water for Chocolate, you'll be disappointed. But if you can stand a little morality play with your magic realism, you may enjoy Pierced by the Sun.
Posted by Lynne Cantwell at 6:00 PM

Email ThisBlogThis!Share to TwitterShare to FacebookShare to Pinterest
Labels: Laura Esquivel, Pierced by the Sun, review