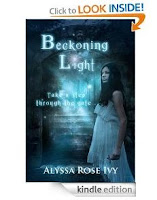 I'm not sure if I've mentioned this before.  But a couple of Christmases ago, I won a whole bunch of indie e-books in a contest.  Last year, I talked myself into attacking the virtual stack with vigor -- which is why I have so many books to write reviews for.

When I first glanced over the stack, I found, in general, a 50-50 split.  About half the books I won't review, either because I bailed due to lack of interest in the subject matter or due to the book not being up to par -- either the story had a major flaw or the book needed a thorough edit.  (To be fair, I've found a similar 50-50 split among the traditionally-published books I get in my World Fantasy Convention goodie bags: sometimes the writing is lame, sometimes I've read the basic story too many times, and sometimes the subject matter isn't to my taste.)

Beckoning Light was one of the books I won, and I liked it well enough that I sought out, and paid money for, the second book in the trilogy.

The book is a YA fantasy.  The main character is Charlotte, a teenaged girl who has been living in Alaska for the past several years, following her mother's death.  Now she and her older brother Kevin have moved back to South Carolina while their father pursues a job opportunity in the Arctic.  They're living back at the old homestead with their mother's brother, Monty.  Kevin picks up right where he left off, hanging out with his best friend Liam and making the basketball team.  But he's worried about Charlotte, who, he thinks, needs a more active social life.

Charlotte is more ambivalent about their homecoming.  For one thing, she had a crush on Liam before they left, and she wonders where that will lead now.  For another, on her first day of school, she meets an annoying kid named James who keeps turning up at odd moments, and who can't seem to stop staring at her.  And she's drawn inexplicably to a gate in the garden of the old house -- a gate their mother told both Kevin and her to never go through.

Of course, Charlotte goes through the gate, into another world, and immediately becomes emotionally attached to the first person she meets there -- a young man named Calvin.  He feels the same way about her.  Why is it so hard for the two of them to part? Why did Charlotte's mother want to keep her out of the world beyond the gate? And what if her mother didn't die, after all?

I thought Ivy did a good job in handling both the real world and the fantasy world she's created.  The characters are mostly well drawn and the plot seems fresh, even though it's a story that's been told many times before.  I liked Charlotte's spunk.  And as I said, I was interested enough to buy the sequel.  Now I'm hoping that the third Afterglow Trilogy book will be out soon.
Posted by Lynne Cantwell at 6:00 PM