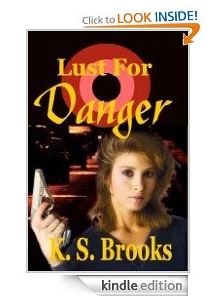 I'm not a huge fan of either books or movies where people make a habit of waving guns in the air and stuff blows up real good.  But I find myself liking Brooks' "Agent Night" books, and if you do like this sort of thing, you'll probably like them, too.

Lust for Danger is the first in what is currently a three-book series (and why didn't I know there was a third book 'til just now?  Note to self: Must speak to the author...).  The main character in each is Kathrin Night, a badass special agent who works for the Bureau of International Trauma Analysts, a secret United Nations agency.  She's been trained by both the FBI and U.S. Navy Intelligence, and she has the requisite nerves of steel, as well as the brains and physical training, to get herself out of just about any situation.  But make no mistake, Agent Night is all woman.  She appreciates the feel of silk and the taste of a good wine, and she's not above using her body to get what she wants.

As the book opens, Agent Night steps out of her New York apartment in her nightgown to buy milk for her breakfast, and casually foils an armed robbery at the convenience store in the process.  Not long afterward, B.I.T.A. sends her to Maine to check out an explosion that leveled a factory.  Her boss believes some terrorist group is responsible, but so far, none has come forward.  It's up to Kathrin to figure out what happened.  But soon enough, she begins to suspect that terrorists aren't involved at all, and that in fact the attack was politically motivated.  B.I.T.A. is immediately ordered off the case, so Kathrin -- suspecting a cover-up -- goes off the clock to find out what really happened.  Chasing her quarry across several continents, she discovers a far-reaching plot for mass murder, and nearly becomes a victim herself.

The book is fast-paced, of course, and both "lust" and "danger" are well-represented in its pages.  Thriller fans should love Lust for Danger.
Posted by Lynne Cantwell at 6:00 PM