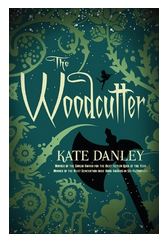 I'm not sure what I was expecting when I picked up The Woodcutter:  a new kind of fairy tale, maybe; or maybe something more lyrical, similar to the work of Patricia McKillip or Robin McKinley.  What I got was something else entirely -- a sort of private-eye noir tale, set in the world of make-believe.

The Woodcutter of the title is the main character.  He is an enchanted being who is sort of the one-man detective force of fairyland.  If bad stuff happens, he's called in -- and he must leave his mortal wife for however long it takes to solve the case.  As the book opens, he hasn't been called into service for many years.  But now a young woman is found dead in the forest, and a glass slipper nearby is a giveaway to her identity.

To help the Woodcutter find her killer, the River God gives him three magical axes, but he must complete the God's challenge in order to receive them.  If he cannot solve the case before he has used up all the axes, he is doomed never to solve it.  Eventually, he uncovers a surprisingly brisk trade in pixie dust (and the heartbreaking way it's being harvested), and it becomes clear that a power-mad faerie queen is at the heart of the trouble.  What will put everything right at last?  Oh, please; if you've seen "Sleeping Beauty," you know the answer.

I looked over some of this book's reviews at Goodreads to refresh my memory before starting this post.  Some of the critics didn't like the way Danley pulled so many fairy tales into the story.  Having a history of creating mythological mashups myself, I wasn't bothered by that.  No, what bothered me about the book was the voice.  A book peopled with fairy tale characters requires a bit of whimsy, I think, but there was nothing whimsical in Danley's just-the-facts-ma'am narration.  It seemed a little cold and off-putting for the setting.

Also, the scene with the River God wasn't set up at all.  Typically in fairy tales, either the main character makes some sort of statement about why he's pursuing X, or another character advises him that he needs X in order to accomplish Y.  Here, it became clear eventually that the Woodcutter needed the River God for something, but I had no idea what it was until after he obtained the axes.  A little bit of explanation up front would have helped me enjoy the scene more.

One other thing: The chapters were exceedingly short.  Chapter length is certainly the author's prerogative, but many of these chapters felt like scenes that could have been combined into a longer chapter.  A chapter break interrupts the narrative flow, and I found that to be a bit of a problem here.

As a mystery, The Woodcutter was somewhat entertaining.  Just don't expect a fairy tale.
Posted by Lynne Cantwell at 6:00 PM