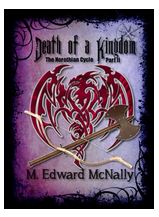 It's been awhile since I reviewed the first Norothian Cycle novel here, so methinks it's time for another.

My 5-star review on Goodreads for this book was terse:


This series keeps getting better. I love the focus on Tilda's friends in this book, and Allison is the most kickass princess I've ever met. Looking forward to books 3 and 4!

All of which is true (and books 3, 4, and 5 are, in fact, terrific; we will get to them in time), but it requires some elaboration.

In Death of a Kingdom, our intrepid band of friends splits up.  Tilda Lanai, the hapless Zeb Baj Nif (who's also haplessly smitten with Tilda, and why not?), and lapsed Circle Wizard Phinneas Phoarty (I started to call him a renegade, but that's too swashbuckling an appellation for poor Phin) travel with Duchess Claudja back to her home in Chengdea.  Of course, it's more complicated than that; the kingdom of Daul, of which Chengdea is a part, is crumbling, and is at risk of being overrun by Ayzantium. Claudja and her father cook up a desperate plan to save Chengdea by forging an alliance with the Codian Empire, and Tilda, Zeb and Phin are enlisted to escort Claudja to Emperor Albert's castle at Laketon and home again.

Enter Allison, Princess of Beoshore and Albert's sister.  She makes her appearance in our tale dressed as a warrior -- which, in fact, she is, and quite a good one.  Allison and Claudja bond, and Allison returns with them all to Chengdea to help in the coming battle.

Nesha-tari, meanwhile, goes home -- and learns a surprising secret there.

The only one of the Sable City band who does not appear in this book is John Deskata.  But don't worry, he turns up again in the next book.

In all, Death of a Kingdom is a satisfying second book in this epic fantasy series.
Posted by Lynne Cantwell at 6:00 PM