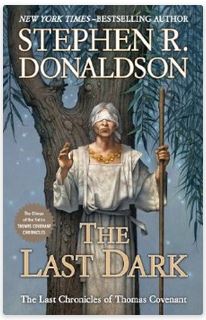 I believe this is the first time since A Man Rides Through that the ending of a Donaldson novel has left me grinning from ear to ear.

First, a little background geekery: I am a huge, unabashed fan of Stephen R. Donaldson, and have been since 1980 or so -- ever since I discovered Lord Foul's Bane in my local library and remembered that a college friend had said it was a terrific book. (Thank you, Elizabeth, wherever you are.) I've read all of his published work, I think, and have met him in person several times. In addition, I've been an active member of the message boards at kevinswatch.com for more than ten years (ask me about the EZ Board days -- on second thought, don't) and I count many of the posters there as real-life friends. One of those friends loaned me an ARC of this book, and this review is based on that version, although I've got the final one on my Kindle right now.

The three novels that comprised the original Chronicles (over at the Watch, we call 'em the Chrons for short) were all published in the late 1970s. In the early 1980s, the Second Chronicles of Thomas Covenant were released. And then there was a 20-year hiatus while the author got on with living his life, learning what he needed to know in order to write the Last Chronicles.

The setup for the series is this: Bestselling author Thomas Covenant contracts leprosy and his life falls apart. His wife leaves him, taking their infant son, and he becomes a pariah in his hometown. (Leprosy is still not a fun disease today, but it was scarier in the '70s, before there was a cure.) Covenant runs into a beggar who hands him a piece of paper that asks him about the necessity of freedom. Soon afterward, he finds himself translated to an alternate reality/parallel universe/place in his own head called the Land. There, he is cured of leprosy and revered for his white gold wedding band, as white gold is a conduit for a kind of power called wild magic. In addition, a bad guy named Lord Foul the Despiser claims anything Covenant does will play right into his hands. Covenant buys none of this; his life since his diagnosis has been harsh reality, and so he spends the first three books both doing and not doing stuff he regrets while he decides whether the Land is real -- and whether it even matters.

In the Second Chrons, Covenant's experiences in the Land have changed him, but he still has work to do. Enter Linden Avery, a doctor new to town, but with a horrific past. As a child, her father forced her to watch him commit suicide; as a teen, she suffocated her abusive mother. She, too, meets up with the beggar, who tells her there is also love in the world. She is present when Covenant swaps places with his ex-wife, Joan, as the sacrificial victim of a cult. Both Linden and Covenant are then transported to the Land, where Lord Foul is in the process of destroying the ecosystem. Linden, it turns out, has a magical health-sense that allows her to use Earthpower to heal. Of course, the power can also be misused, and she has her share of missteps along the way. And she and Covenant fall in love.

The Last Chrons open again in the real world, where Linden heads the local mental hospital in which Joan is a patient. She has also adopted Jeremiah, a boy whose hand was damaged in the same ritual in which Covenant was killed and who consequently suffers from dissociation disorder. This time, a whole bunch of people suffer fatal injuries in a gunfight before their translation to the Land -- Linden, Jeremiah, Joan, and Covenant's son, Roger. Roger has been turned by Lord Foul and is using his mad mother to trick Linden into bringing down the Arch of Time so Foul can escape the Land. Roger also kidnaps Jeremiah, and Linden will do almost anything to get the boy back -- including resurrecting Covenant.

There's a lot to wrap up in this final book of the ten-book series, and Donaldson does an admirable job. As the book opens, Linden is coming to terms with Jeremiah's recovery, while Covenant must find his way back from the edge of the Sunbirth Sea where Joan died. The Worm of the World's End is coming -- it's beginning to gobble up stars -- and the Elohim mistrust Jeremiah's solution for protecting them. Covenant's leprosy is back, courtesy of Kevin's Dirt, and Linden is still kicking herself for not apologizing to Covenant's lost daughter Elena. And there's every indication that this journey in the Land is going to end where the whole thing began: in the bowels of Mount Thunder.

The Last Dark has everything Donaldson fans love him for: big words, big ideas, and extreme peril; noble horses, Haruchai, and Giants; and Thomas Covenant. And in the end, as that beggar told Linden, there is also love in the world. I can't wait to read it again.
Posted by Lynne Cantwell at 6:00 PM