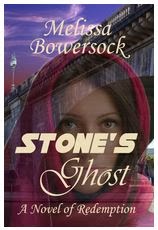 I know, I know -- Halloween was last week. But November, too, tends to lend itself to dark and mysterious goings-on. So I offer you a ghost story that's less scary than introspective.

You may remember when the city of Lake Havasu, Arizona, bought the old London Bridge from the city of London, England (the one that crosses the Thames today is a new span), and rebuilt it over the Colorado River as a tourist attraction. The main character of Stone's Ghost, Matthew Stone, lives in Lake Havasu. His livelihood is due in part to the bridge -- he owns a jet ski rental place and is, by all accounts, a great guy to work for. He's dating a wonderful woman and is kind to his mother, who lives nearby.

And then one night, crossing the bridge, he nearly runs down someone. He returns to apologize, and discovers that she's a ghost.  Matt doesn't believe in ghosts, but he finds himself drawn to Janie. Bit by bit, he pulls her story out of her, and the more he learns about her, the more he is able to come to grips with some of the kinks in his own thinking. But will he be able to sort out his own head in time to keep from losing the best parts of his own life?

This isn't a horror novel, despite the "ghost" in the title. The reader can never quite decide whether Janie is real, or whether she's the manifestation of things Matt has kept himself from thinking through. And that's okay, because it's Matt's transformation that really matters.

Stone's Ghost is well-written and well-edited, and written in an engaging style. I heartily recommend it.
Posted by Lynne Cantwell at 6:00 PM