Kitty in the Underworld - Carrie Vaughn 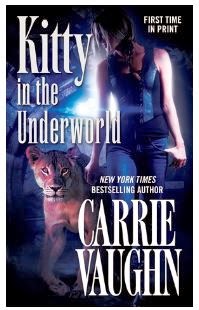 I'm always interested to see how an author of a long-running series keeps her stories fresh. This is the 12th outing for Vaughn's Kitty Norville, a late-night radio talk show host in Denver who also happens to be a werewolf. I absolutely loved the first book (she had me at Denver and radio -- the shapeshifter thing was a bonus) and I have mostly enjoyed the others (the book set in Las Vegas didn't really grab me). But when you get to dozen outings with the same, uh, pack, you might begin to have some trouble delivering.

Vaughn stayed close to home with this book, and went minimalist in a way. While husband Ben (who, for the uninitiated, is also a werewolf, as well as a lawyer -- oh stop, they are not the same thing) is away on a business trip, Kitty is lured up into the mountains by the scent of a couple of werebeasts encroaching on her pack's territory. She's tranquilized and captured, and sucked against her will into a cockamamie scheme to try to defeat Roman, the vampire who's playing to win the Long Game (vampires vs. werewolves, with world domination as the prize). Her captors believe Kitty is an avatar of Regina Luporum, the legendary wolf who suckled the eventual founders of Rome; Kitty has already been drawn to her, and believes she too may have been a werewolf. (I bring this up because I expect it will come up again in future books.)

Kitty spends a good chunk of this book locked away in the dark. That could be a problem in terms of driving the plot, but Vaughn throws her readers enough bones that I was willing to stick it out. Still, I enjoy the interplay between Kitty, Ben, and Ben's cousin Cormac (and his ride-along witch, Amanda), and that was mostly missing here.

I found Kitty in the Underworld to be an enjoyable read. But Kitty and Roman are going to have to meet in epic battle sooner or later, and I wonder how much longer Vaughn will draw her own Long Game out.
Posted by Lynne Cantwell at 6:00 PM