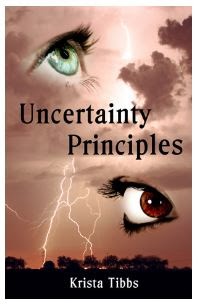 What if you could predict the future? What responsibility would you have to try to stop bad things from happening? And what effect would your intervention have on the course of future events? Those are the issues Tibbs's characters struggle with in this engaging novel.

An eclectic group of college seniors is assigned, seemingly at random, to work together on a project that must be completed before they can graduate. Aiyana is the driven one; Brian is the baseball player/science nerd; Becky is the religious, most-likely-to-marry-and-stay-home one; Kai is the slacker; and Dmitri is the quirky genius. The project must be their own design, and they flounder around, trying to find something that will suit. In the process, they stumble upon a method of predicting world-changing events by measuring energy fluctuations in the atmosphere. Becky believes it proves the existence of God; Aiyana, the atheist, thinks the whole thing is crazy; and Brian is obsessed with getting scientific proof. Things go wrong in spectacular fashion -- so much so that you would think the five would run screaming in opposite directions after graduation and never see one another again.

But somehow, they all end up living near one another, and Becky and Aiyana even become friends. When Brian predicts an event of mass murder in the town where they live now, the group comes together again to set things right. Or not. The plot resolves, but uncertainty plays a big part in everything that happens -- right through the epilogue, which features two separate interpretations of the final scene.

Tibbs' writing is solid and the science seems plausible. If you like your stories tied up in a neat bow at the end, Uncertainty Principles probably won't be your cup of tea. But if you enjoy weighing what-ifs and varying points of view, you may very well enjoy this book. I did.
Posted by Lynne Cantwell at 6:00 PM