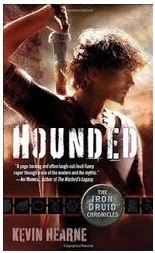 I could tell right away that a guy wrote this book. All the goddesses are voluptuous and irresistible, and they all want to have sex with the main character.

That main character would be Atticus O'Sullivan -- or at least, that's the name he's going by these days. He's a couple of centuries old, give or take. He's the last surviving Druid on earth. And he's taken up residence in Tempe, Arizona, of all places, where he runs a New Age bookstore and tearoom. It's also where he's hiding out from Angus Og, the Celtic god, who wants a magic sword Atticus has hidden under the basil in his herb garden.

I've had a couple of people recommend this series to me. I found this first book to be okay, but I probably won't read any more of them. The randy goddesses put me off, for one thing, but that's not the only thing. None of the characters have much depth to them -- not even Atticus, who ought to have gained some wisdom in his 2100 years on the planet, but who instead seems okay with skating along on the surface of life. I liked his dog, Oberon, with whom he can converse via mind-speak, and who has some of the funniest lines in the book.

If you're looking for a light, funny read featuring Celtic gods in Arizona, this series may be for you. Lots of people like it. It's just not really my cup of herbal tea.
Posted by Lynne Cantwell at 6:00 PM