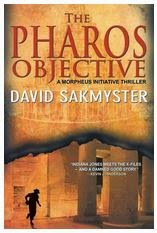 I was on a World Fantasy Convention panel with David Sakmyster a few years ago. The panel was about using mythology in fantasy stories, and I made a mental note then to read this book. I'm a little ashamed to admit that I am only now getting around to it.

Our hero is Caleb Crowe, a university professor whose family is adept at remote viewing -- a paranormal talent in which the subject can see events happening across the world, or even far back in time. Caleb's still beating himself up for an accident years before that put his sister Phoebe in a wheelchair. And he hasn't forgiven his mother --  as a child, he drew remote-viewing pictures of the place where his father was being held prisoner, and she refused to act on them to rescue him.

Now, his mother has fallen in with a team of psychic archaeologists to find the legendary treasure supposedly hidden beneath the ruins of the Pharos Lighthouse. Grudgingly, Caleb agrees to go along with the team to Egypt, even though he trusts neither the motives of the team's leader nor the man's interest in his mother. The lighthouse's architect built in traps and puzzles to protect the treasure, and while Caleb's talent gives him the inside track on solving them, it's by no means certain he will gain the prize -- for the team has also drawn the interest of a shadowy group that appears to be blocking their attempt to find the treasure.

The story was well-written and the puzzles had me stumped. I liked Caleb's relationship with his sister.

However, my file had some formatting issues. Some chapters were in Times and some were in Courier, and there didn't seem to be a reason in the narrative for the shift.

Still, for fans of Indiana Jones, The Pharos Objective is worth a read.
Posted by Lynne Cantwell at 6:00 PM