The Other Side of Virtue - Brendan Myers

This is the second book of three in my short stack of dead-tree books. I'm going to try to stick to e-books after this. (At least until I collect my book swag at the World Fantasy Convention in November, anyway.) 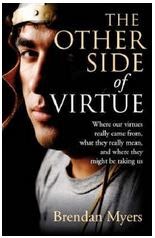 This is not a novel. It's a book about ethics.

Myers has a Ph.D. in philosophy. He's also a Druid. So he approaches his subject from an angle that may be unfamiliar -- even perhaps uncomfortable -- for readers steeped in the Judeo-Christian tradition.

He begins by tracing the evolution of the notion of virtue, from Heroic societies (primarily the Norse and the ancient Celts) through Classical Greece and Rome, the humanist side of the Renaissance, the Romantics, and Nietzsche. He rounds out this survey course with a discussion of the qualities of virtue in two recent fantasy series, Tolkien's Lord of the Rings and Rowling's Harry Potter novels, and looks at how these two authors have implemented some of the great ideas on the subject into their works.

He then talks about modern life, and how we respond to what he calls the Immensity. In the final analysis, he argues, there is no overarching meaning to our lives; instead, each of us determines, moment by moment, our reason to continue living. And we make the determination with our actions. "For it is what we do," he says, "more than anything else, that creates a worthwhile life."

As a writer, I was especially heartened by his support of storytelling as critical to that worthwhile life. He says, "It is through storytelling that life can make sense: life as recounted in stories is intelligible, structured, unified, and one's own." (Italics are in the original.)

I found The Other Side of Virtue to be very readable, despite the plethora of big ideas packed into it. I'll be keeping this one on my bookshelf.
Posted by Lynne Cantwell at 6:00 PM

Email ThisBlogThis!Share to TwitterShare to FacebookShare to Pinterest
Labels: Brendan Myers, review, The Other Side of Virtue