With this, I've hit the bottom of my dead-tree TBR pile. I'd be more excited if I thought it would last. But World Fantasy Convention and its freebie book bag of doom is right around the corner.... 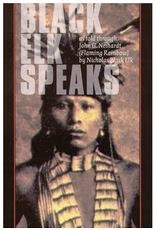 For years, I have meant to get around to reading Black Elk Speaks. When I found a copy in my favorite used bookstore several months back, it seemed like a sign that now was the time to do it.

This book, which is considered a classic on Native American spirituality and culture, is somewhat problematic. Nicholas Black Elk was a Lakota Sioux medicine man who spoke with John Neihardt in a series of sessions in 1930-31. Black Elk's life spanned eras -- that of his tribe's traditional life on the Plains, its wars with white men, and its subsequent defeat. He talks about all of that. But his aim in talking to Neihardt at all is to pass on to him details about the Sioux religion -- a religion that he feared would be lost unless he shared his beliefs with the author.

Neihardt's agenda was different. He was a poet, according to Vine Deloria Jr. in the foreward to my edition of the book, who was interested in chronicling the history of the West. For him, Black Elk's narrative -- and those of his fellow Ogalalla Sioux who helped him tell their story -- was raw material to be shaped into a book that would appeal to white readers. In doing so, some of the meaning, as well of some of the flavor, of Black Elk's words was sacrificed. You can readily see the result in Appendix 2, which compares the original notes of Black Elk's story of the legend of White Buffalo Woman with the edited version in the text.

Still, the old man's voice resonates down through the years. And while he clearly worried that he considered his life a failure because he could not bring the Six Grandfathers' world to fruition during his own lifetime, the fact that we're still reading, and considering, these words, more than 80 years later indicates -- to me at least -- that he may yet succeed.
Posted by Lynne Cantwell at 6:00 PM