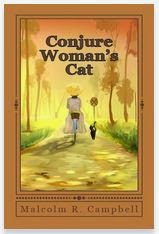 Conjure Woman's Cat takes on a host of tough topics -- race, class, and sexual abuse -- and tells about them from the point of view of a magical cat.

Lena is the name of the cat in question. She belongs to Eulalie, a conjure woman (in a different neighborhood, she might have been called a hedge witch) who lives in a tiny town in rural Florida. In this era, poor black women still care for the children of wealthy white racists and the Ku Klux Klan stands ready to assist if any black person gets above their station. When a young black girl named Mattie disappears, Lena steps between the worlds to find out what happened to her. And when Lena discovers that Mattie was raped and murdered by some local white boys, she and her conjure woman wreak their own version of justice on the perpetrators.

Of course, when any book is narrated by an animal, readers have to suspend their disbelief from the get-go. I didn't find that difficult with this book. I was quickly drawn in by Lena's unique voice, and by the mysterious goings-on around her and Eulalie. I loved the way Campbell made magic part of the fabric of the place. And I was glad to see those boys get the comeuppance they deserved.