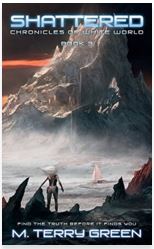 When we last left Thirteen, Cord, and little Miyu, they had liberated a slavers' ship and were heading for Helado, the city-on-a-volcanic-island where Thirteen hoped to find and rescue her sister at last. Hot on their heels was Helado's navy, headed by Prince Céfiro, who has sworn to win his father's favor by bringing in the Ghost -- the pirate who preys on Helado's most profitable industry by attacking slaving ships and setting the slaves free.

Cord has no interest in going to Helado, for reasons he is trying to keep secret. But he knows where Thirteen's sister is, and Thirteen has demanded that he take her to her. So when the navy catches up to them at last, he does the one thing he knows will reunite the sisters.

To tell you what he does would be a major spoiler. Suffice it to say that Green provides her readers with more than our fair share of twists and turns. Thirteen, Cord, and Miyu are affecting and engaging characters, and I couldn't stop reading until I reached the final page. If you're a fan of dystopian sci-fi, I highly recommend the entire Chronicles of White World series.
Posted by Lynne Cantwell at 6:32 PM