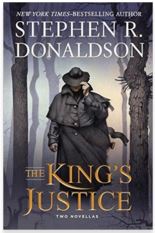 Happy Thanksgiving! I'm always thankful for a new book by Stephen R. Donaldson, and I liked this one well enough that I'm giving it a place on my annual holiday book list.

The King's Justice is the first of two novellas in this book. The fellow on the cover is Black, the protagonist. As the story opens, it's clear he's on a mission for his king. It's also clear, as he approaches the village of Settle's Crossways, that he has the power to encourage people to help him and give him information they might otherwise have kept to themselves. And information is what Black is after, for an evil has wormed its way into the fabric of Settle's Crossways, and it's Black's job to set things right for the king -- no matter what it takes.

This story is written in present tense -- a departure from Donaldson's other work, but it's necessary, I think, for the theme of the story. Black lives his life in the present. He doesn't think about his life before he was employed by the king -- or what was done to him so he could do this job -- and he certainly doesn't think about the future.

Some Goodreads reviewers have complained about the gore in this story. There's one tough scene, and it's mild compared to the GAP books (and very mild compared to some battle scenes I've read by other fantasy authors).

The second novella is The Augur's Gambit, and I've been waiting to hear the ending of this story ever since I heard Donaldson read the beginning few pages at the World Fantasy Convention last year. Our hero here is Mayhew Gordian, hieronomer to the queen of Indemnie, Inimica Phlegathon deVry the Fourth. And his plight is a gordian knot indeed, for he learns that his queen has proposed marriage to each of her barons, including the married ones, in an effort to discover which of them is plotting against her. But that's not all. Besides Indemnie's internal intrigue, another power threatens the island nation from across the sea. Gordian has read the entrails countless times, but he does not know the outcome of either dilemma. And he's beset by a personal problem, as well -- his attraction to the queen's daughter, Excrucia Phlegathon deVry. (Yes, that's right -- the love interest is named Excrucia.)

The story seems much in the model of Donaldson's Mordant's Need series -- high fantasy, with an inscrutable ruler, grasping barons, and at least one unexpected plot twist. I enjoyed those, and I enjoyed this story, as well.

I'd recommend any of Donaldson's books, of course. But if you're new to his writing, this volume is a good way to sample his style before committing to a series.

Posted by Lynne Cantwell at 7:41 PM