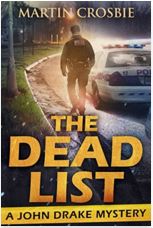 The Dead List is an intriguing mystery novel. It's easy to see why the Kindle Scout folks picked it to publish and promote. And it's a fine option for this night, whether it's the year that's passing or the one to come that you want to keep your mind off of.

John Drake is something of a cipher. He's from somewhere back in eastern Canada, or so he claims. But he's landed here in the tiny town of Hope, British Columbia, with some police training under his belt, and is working for the local police department. Then a man is found dead. The local cops want to call it an accidental death, but Drake thinks it's murder -- and saying that aloud is enough to bring in the RCMP.

Crosbie's style is engaging enough that even when there's not much movement in the plot -- and there's not, for perhaps the first third to half of the novel -- you're caught up in the story anyway, watching the interplay among all the characters. When things get moving, though, the book becomes very tough to put down.

I'm looking forward to reading more books about Drake, if only to find out what he's running from.