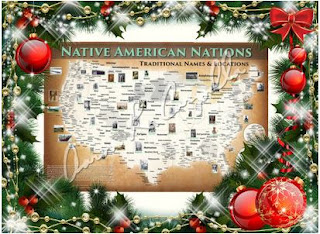 Okay, okay. This isn't a review of a book. But this would still be a terrific gift, so I'm including it in my holiday guide.

Aaron Carapella has made it his mission to spread correct information about the names and locations of Native American tribes in North America -- both before, and at the time of contact with, Europeans. He has done a ton of research to find out each tribe's territory and the name by which the tribe refers to itself.

He started out with maps of the United States and Canada, and has since expanded his line to cover Mexico, as well as Central and South America. He even has specialized maps -- including a separate map for Alaska, which I found quite useful when I was planning Dragon's Web earlier this year.

If you're a teacher, a historian, or affiliated with a museum -- or even just interested in Native America -- Aaron's maps are a great resource.

I don't usually include buy links in my reviews, but I see only a few of Aaron's maps listed on Amazon, and they're all from third-party sellers. If you're looking for more information or would like to see the whole line of maps, go to Tribal Nations Maps and check them out.