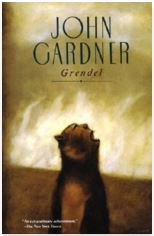 I'm embarrassed to admit that I had never read this fantasy classic until after I heard it recommended twice in one day at last year's World Fantasy Convention.

Most English-speaking readers are familiar with Beowulf. Even if it wasn't foisted upon you in a high school or college English class, most people have at least heard of it: the eleventh-century epic poem that was among the first, if not the first, instance of English literature. The story, set in Scandinavia, tells of a monster that terrorizes a local lord's hall until Beowulf, our hero, comes from across the sea to slay it. Once he does, the monster's mother comes after Beowulf, seeking revenge.

The monster's name is Grendel -- and in Gardner's book, he tells the story from Grendel's point of view. But Grendel is the narrator here, not just the main character, and he is caught in an existential morass -- forced by fate to attack these people over and over again:


I understood that the world was nothing: a mechanical chaos of casual, brute enmity on which we stupidly impose our hopes and fears. I understood that, finally and absolutely, I alone exist. All the rest, I saw, is merely what pushes me, or what I pus against, blindly -- as blindly as all that is not myself pushes back. I create the whole universe, blink by blink.

Well, he's young. As he grows older, he visits a dragon (a very funny scene), and takes the dragon's philosophy to heart. Eventually, destiny catches up with him in the form of Beowulf, as we all knew it would, and the ending scene echoes the story's beginning, as the wheel of time turns and the world moves on.

While it's always interesting to read a famous story from the villain's point of view (see Gregory Maguire's Wicked), Grendel is far more than that. Gardner is a superb writer, and he's managed to make Grendel almost a sympathetic character -- almost (dare I say it?) human.

Highly recommended, and required reading for anybody who aspires to write epic fantasy.
Posted by Lynne Cantwell at 6:00 PM