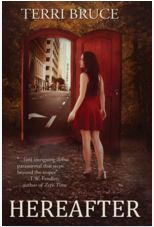 Irene Dunphy is 36 years old. She lives in Boston, and she has an okay middle-management job that allows her to go out clubbing most nights with a couple of friends. Then one day, she wakes up on the side of the road, having only a vague recollection of what happened the night before. She gets in her car and drives home, to discover that she's apparently been gone for some time. Her mail has piled up and her answering machine is full of messages, mostly of the "Irene, where are you?" variety.

Slowly, it dawns on her that she's dead, and she begins to grapple with the question of why she hasn't gone through the tunnel to The Light. She meets a still-living neighbor -- a 14-year-old boy named Jonah -- who knows a lot more about death customs than any well-adjusted teen should. Together, they begin to figure out how to get Irene to move on.

I'll be honest: I didn't much like Irene. Besides her obvious drinking problem, she struck me as vapid and shallow, and way too snippy to Jonah. Although I didn't much like him, either. By the thirty-percent mark, I was sick of their bickering and ready to bail. But I got interested again when Irene began learning her way around ghostly Boston, and eventually she becomes at least a little self-aware.

So in the end, I was glad to have stuck with the book. But I'm on the fence about sticking with the series. I gather from reviews on Goodreads that Bruce plans at least five more volumes, one of which is already available. It's possible that the author made Irene such a piece of work in book one in order to give her plenty of room to grow in the following books. The danger with that game plan is that you end up with a main character who is so unlikable that your readers won't bother seeing it through.

Maybe I'm just not the audience for this type of urban fantasy. The book has plenty of four- and five-star reviews on Goodreads. If you don't mind shallow, cranky protagonists, Hereafter might be right up your alley.
Posted by Lynne Cantwell at 6:00 PM