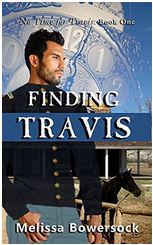 Life is not going well for Travis Merrill. He has pursued, and abandoned, several careers without really finding his niche. Now his wife has left him. Just about the only good thing he has left in his life is his volunteer work at Fort Verde, a rebuilt frontier encampment in Arizona.

One night, as he's portraying the cavalry surgeon during a holiday event at the fort, he dozes off in a chair in the surgeon's quarters -- and wakes up in 1877.  As luck would have it, the fort -- then known as Camp Verde -- doesn't have a surgeon in residence. So Travis passes himself off as an Army surgeon from back East, and tries to make it look good by relying on the little bit of medical knowledge he gained during one of his abortive career attempts. As time goes by, Travis begins to realize he may be stuck in 1877 forever.

I always enjoy Bowersock's books; she has a talent for working a paranormal angle into just about anything, including historical fiction. Fort Verde is a real place, and Bowersock has clearly done her homework on the fort and her chosen time period. Travis is an appealing character, but my favorite might be his assistant, Riley -- a finer stoic Irishman you won't find anywhere.

Kudos to Bowersock for this wonderful start to her new series. Highly recommended.
Posted by Lynne Cantwell at 6:00 PM