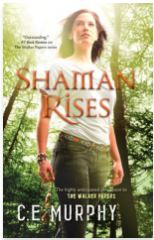 I'll get to the review in a minute. But first, a story: I discovered the Walker Papers series at about the same time as I discovered urban fantasy as a genre. I've now sampled several series, but the only ones I've stuck with until the end are Carrie Vaughn's books starring Kitty the werewolf, and C.E. Murphy's books starring Joanie Walker the reluctant shaman. When Mountain Echoes came out in 2013, I devoured it, and made a note to grab the next book in the series as soon as it came out. And then I forgot about it. It wasn't until earlier this year that I said to myself, "Hmm, I wonder if that final book ever came out?" And lo and behold, it had...in 2014. This, Dear Reader, is what a diet of mostly indie novels does: when readers are conditioned to expect a new book from their favorite authors every few months, a sequel that won't be available for a whole year is easily forgotten.

Anyway, to the review.

As Shaman Rises opens, it's been a year since Joanne Walker first realized she had shamanic powers. Back then, she was the girl mechanic in the Seattle P.D. motor pool, running from her past and secretly in love with her boss, Capt. Morrison. By the time we get to this book, she has quit her job; she has learned of her mother's magical power in Ireland and her father's shamanic power in North Carolina and integrated them both into her own; and her relationship with Morrison is progressing nicely. Now she's drawn back to Seattle and into the final battle with the Master. She's strong, but he's ancient, and she has a lot to lose -- her friends, her lover, her city, and her life.

If you haven't read the earlier books, don't start with this one. Murphy makes very little effort to catch up readers to what's going on. Then again, she doesn't have time. This book starts off with a bang and doesn't let up; Joanie herself hardly gets a chance to catch her breath.

I love this series for its blending of Native American and Celtic beliefs. And when it comes to the pagan stuff, Murphy gets that right, too. Kudos to Murphy for that, and for bringing her series to a breakneck close. Recommended -- but read the earlier books first!
Posted by Lynne Cantwell at 6:00 PM