Being Travis (No Time for Travis Book 2) - Melissa Bowersock 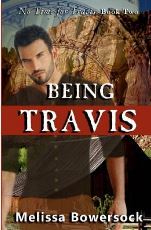 I enjoyed Finding Travis, Bowersock's first installment in this series, and was pleased to hear that she had written another book with the same appealing characters. I am happy to report that Being Travis did not disappoint.

This book picks up some time after the end of the first book. To recap, Travis Merrill was volunteering as an army surgeon in a reenactment at Camp Verde, Arizona, when he was somehow whisked back in time to the real camp. He managed to pull off pretending to be a real doctor, with the assistance of one Corporal Riley. Now, Travis and Riley have both mustered out of the Army; Travis has married Phaedre, a woman he met at the camp, and is setting up a homestead not far away, with Riley's assistance. As time goes on, Travis discovers it's becoming harder to keep the secret of who is is and when he's from -- especially from his wife.

This is one of those stories where you just want to take the main character and shake some sense into him. Riley, of course, has some inkling of the truth, but all Phaedre knows is that Travis is hiding something from her, and that's not a good foundation for any marriage. Travis did a pretty good job of screwing up his life in our time, and this reader would really hate to see him screw things up in the past, too.

Bowersock has included some intriguing subplots, including one in which a notorious historical figure stumbles across Travis's neighborhood. I hope we've seen the last off that fellow, but the writer in me wonders whether he won't come back for an encore in the next book.

Which is to say that I hope Bowersock writes the next book in this series soon. I would highly recommend both books in this series for readers who enjoy historical fantasy.
Posted by Lynne Cantwell at 6:33 PM

Email ThisBlogThis!Share to TwitterShare to FacebookShare to Pinterest
Labels: Being Travis, Melissa Bowersock, No Time for Travis, review