Our Lady of the Ice - Cassandra Rose Clarke 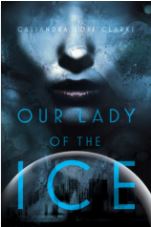 It's the time of the year when I look at my TBR pile of dead-tree books and realize I only have a few months to get through it before I get another book bag at this year's World Fantasy Convention. So I may be reviewing more trad-pubbed books than usual over the next few months.

Our Lady of the Ice is steampunk, I guess. Around the turn of the 20th century, developers built a weatherproof dome in Antarctica and put an amusement park under it. They also built a city under the dome for the people who would work in the park, and called it Hope City. But they also built robots, some more humanoid than others, to work in the harsh climate. As the novel opens, it's been several decades since the park was shut down. The infrastructure may (or may not) be decaying, and many people want only to escape to the mainland. That's the dream of Eliana Gomez, a female private investigator -- but she hesitates because it would mean leaving her boyfriend, Diego Amitrano, behind. Diego works for the gangster who controls much of the city, but Eliana wonders how deep Diego is involved. At the same time, a society woman named Marianella Luna has teamed up with a city council member to champion a proposal to grow crops under the dome, thereby making Hope City less dependent on the mainland. But the androids in the park are gaining sentience, and they have their own agenda. And Marianella harbors a secret that could bring ruin to everyone.

I enjoyed the book. Eliana and Marianella are appealing characters, each in their own way. And Sofia, an android and another point-of-view character, was well done. My favorite character, though, might be Luciano, another of the androids, who is not as far along in his development as Sofia in some ways, and yet farther along in others.

The book has a noir feel to it, what with the gangsters and the winter darkness. The dome frames the story: it keeps everyone alive, but it also traps the characters and their corrupt society.

I would recommend Our Lady of the Ice to readers who enjoy alternate history, noir fiction, and androids.
Posted by Lynne Cantwell at 6:00 PM

Email ThisBlogThis!Share to TwitterShare to FacebookShare to Pinterest
Labels: Cassandra Rose Clarke, Our Lady of the Ice, review