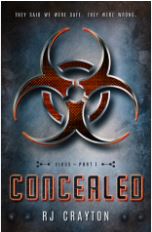 Concealed is the first volume in a dystopian YA series about a virus that has turned the world upside down.

Elaan Woodson is a lucky girl. The Helnoan virus has infected most of the population. Almost everyone who contracts the disease dies from it, although some recover -- and a handful, like Elaan, appear to have a natural immunity. In addition to her immunity, she is also the daughter of a scientist who's working on a cure for the virus, and because of that, she, her brother Lijah, and her father are living in the underground bunker where her father's lab is located. Lijah is a survivor -- as is Josh Wells, the only other teenager in the compound. Elaan and Josh are obviously headed for romance, but Lijah keeps warning her away from him. Lijah says Josh has a secret that will hurt Elaan, but then Lijah has a big secret of his own. And the most important secret is the one Josh's father is keeping from all of them -- one that might cost Elaan her life.

Crayton spends a lot of time in this book developing her main characters and the setting. We learn a lot about Elaan's daily life, and about how the underground facility operates, including the behind-the-scenes machinations like management hierarchies and gossip. The plot, however, takes a while to get going. I found myself wishing somebody would just break down and tell Elaan something already, so the story could move along. Things do finally accelerate, but the action doesn't pick up until near the end of the book.

Crayton is a fine writer, and her topic is certainly timely. I'm looking forward to reading the rest of this series. Recommended for those who enjoy YA science fiction.
Posted by Lynne Cantwell at 6:00 PM