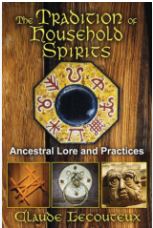 The Tradition of Household Spirits is a fascinating look at spirits of place in the medieval world.

Lecouteaux's biography says he is a former professor of medieval literature and civilization at the Sorbonne, and he has written a number of books on subjects in his field. In this book, he seeks first to explain how and why people in the medieval period believed their homes to be sacred space, and how they delineated the boundaries of that space. He then goes on to talk about the spirits and/or deities these people were honoring. It's clear to him that ancestors took on almost godlike status in succeeding generations; families believed those who first built on the land would stick around to bless them, if only their descendants treated them well.

The author concentrates on European practices and beliefs -- both Eastern and Western -- with a little bit of Asian lore thrown in here and there. He seems to think it significant that so many of these practices are similar, but I was less entranced. After all, most of the peoples he talks about can be traced back to a shared Indo-European homeland. We see that root in language as well as in pagan pantheons; with that much of a shared cultural root, it should be no surprise that people considered walls and hedges to be protective boundaries, and windows and doors to be liminal spaces that needed special protection.

Still, I learned a fair amount from this book. One thing he talks about is the belief that a cricket on the hearth will bring good luck. I always thought the saying referred to a literal cricket, for which I suppose I can thank Charles Dickens (and Jules Bass and Arthur Rankin). But Lecouteaux writes, "Isn't a good housewife sometimes referred to as the 'cricket of the hearth'?" I had never heard that before. Maybe it's a French proverb.

Lecouteaux ends his book with a lament that we no longer honor household spirits today: "Like so many other creatures that once embellished life and brought hope, house spirits have vanished and with them the souls of our houses have fled, never to return." Au contraire, professor: Some of us do still attempt to honor spirits of the places where we live, if not the spirits of our hearths.
Posted by Lynne Cantwell at 5:55 PM