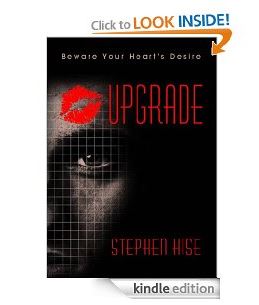 What's the one thing every guy wants?  To have beautiful women fall all over themselves to be with him, that's what.  And that's the subject of Stephen Hise's Upgrade.

Brent Schoenfeld is a brilliant businessman, extremely smart, and richer than Croesus, but he's a schlump -- an average-looking guy who no woman would look at twice if he wasn't sitting on a pile of cash.  Every day, Schoenfeld looks out the window of his office and drools over the women he sees on the sidewalk.  There's one woman in particular who takes his breath away every time he sees her.  But he knows she would have no reason to look twice at him, and the knowledge eats away at him.

Finally, he pays a doctor to perform an experimental procedure on his sex appeal.  It's hideously expensive, but he pays every penny.  And it works!  Suddenly women are falling all over him.  Instead of spending every night at the office, or watching TV at home, he's getting more action than he knows what to do with.  And he works hard to gain the notice of that hot woman he fell for while watching her from his office window.

From there, as you might expect, things get complicated in a hurry.  And the ending provides a nice twist that I didn't see coming.

There were a couple of spots when the point of view changed from third person limited (focused on Brent) to third person omniscient (what I like to call the "little did he know..." voice).  That took me out of the story a little.  But overall, Upgrade was great fun to read.
Posted by Lynne Cantwell at 6:00 PM