The Poppet and the Lune - Madeline Claire Franklin

I can't believe it.  I pulled up this book on Goodreads to steal the cover image, and discovered I'd reviewed it last year -- well before I started Rursday Reads.  So!  An easy week for me!

Here's what I wrote last year: 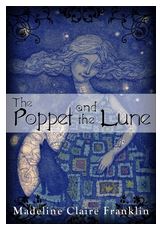 I really, really liked this book. All the children of a small village are killed at once; the village's witch takes pity on the parents and creates a new girl child from bits and pieces of all of their children. The poppet is brought to life, but the witch is killed, and the girl -- Elizabeth -- finds out years later that the witch was unable to finish her before she died.

The poppet strikes out on her own. In a magical forest, she meets a were-man -- a human man who has been turned into a wolf, except for the three days around each full moon when he becomes human again. His fondest wish is to end the curse so that he can go back to his own village and marry his sweetheart. The pair go through many adventures before they each find their happy ending.
Posted by Lynne Cantwell at 6:00 PM

Email ThisBlogThis!Share to TwitterShare to FacebookShare to Pinterest
Labels: Madeline Claire Franklin, review, The Poppet and the Lune