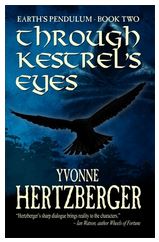 Sometimes the middle book (or books) of an epic fantasy series drags, or else it seems like an overly-long wind-up for the final volume. The good news is that Through Kestrel's Eyes avoids this dreaded middle-book syndrome.  Hertzberger has changed up enough elements in her tale to keep things fresh and the plot moving along.

This second volume of the Earth's Pendulum series is told by the main character, Liannis, in her own voice.  Liannis, the daughter of arch-spy Klast and his wife, Brensa, is a seer -- perhaps the most powerful of the age.  But her training is interrupted when her teacher dies.  Still, however unprepared she feels, the Earth calls her to take her white garments and assist King Gaelen with rooting out a coup at home, and treachery in neighboring kingdoms.

In the process, Earth is wounded -- and it becomes abundantly clear that Hertzberger's Earth is a sentient being that wants everything to be in balance.  If Mama Earth ain't happy, nobody's happy; famine, disease, and general chaos are the result. It's the job of Liannis to help Gaelen and his queen, Marja, fight to keep things on an even keel.