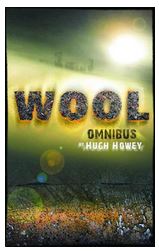 Hugh Howey doesn't need a review from me, but I'm going to give him one anyway.

Chances are that if you like science fiction, you've heard of the Wool phenomenon by now.  Howey is an indie author who sold so many copies of this book that traditional publishers came knocking on his door, offering him a contract.  He finally got one to agree to buy just the print rights, keeping the very lucrative e-book rights for himself -- a deal that would have been unthinkable just a few years ago.

Howey wrote and released these stories one at a time. The first is a novella; the following four books get progressively longer.  All of them tell the story of the inhabitants of an underground silo in post-apocalypse America.  The air outside is toxic, and no one ever goes outside -- except for certain people who, charged with egregious crimes against the silo government, are sentenced to clean the camera that provides the silo with a view of the outside world.  The criminals are sent out in a pressurized suit, and given steel wool with which to clean the camera lens.  Something always happens out there, and they never come back.

It would be a giant spoiler to explain why those sentenced to clean the camera actually follow through with it, and another giant spoiler to explain why they all die out there.  So I won't say any more, other than to say that if you haven't read Wool yet, I recommend that you do so at your earliest convenience.  I've also heard that the next volume, Shift, is just as good, and I've added it to my tottering TBR pile.  And I've pretty much forgiven Howey for beating me out for best sci-fi/fantasy novel in the Big Al's Books and Pals Reader's Choice Awards this year.

Posted by Lynne Cantwell at 7:08 PM