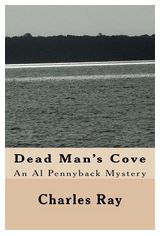 Al Pennyback is an interesting character.  He's a former Army guy -- Special Forces, not that he divulges that bit of information willingly -- who loves to solve puzzles, particularly puzzles that involve people.  He has a smokin' hot girlfriend named Sandra, and a good friend named Quincy whose Washington, D.C., law firm keeps him on a $10,000-per-month retainer to solve puzzles for them.  Al, you see, is a private detective.

In this outing, Al and Sandra have been invited to Quincy's retreat for the weekend.  It's a small enclave of fancy homes on an island in the Chesapeake Bay.  The tiny community of four houses is called Dead Man's Cove, in honor of a local legend about a pirate who died there, and whose fortune is reputedly still on the island somewhere.  The homes are all owned by rich people, most of whom have known each other since college.  And when one of them turns up dead, Al gets a chance to do what he loves best -- solve a puzzle.

This is the first Al Pennyback novel I've read, although it's not the first in the series. But I don't think my reading experience suffered because of that.  Ray does a great job in the first chapter of introducing Al and filling in some of his backstory.  The mystery had me going, and the murderer was a bit of a surprise to me.  Although don't judge the plot by my experience; I'm not one of those readers who enjoys challenging herself to figure out whodunit.  Instead, I read for plot and characterization, and Ray has done a fine job with both of those here.

Dead Man's Cove is an entertaining way to while away a few hours. Let me know if you figure out whodunit before the big reveal.
Posted by Lynne Cantwell at 4:00 PM