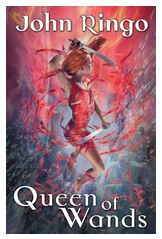 As a Neopagan, I have to tell you that Queen of Wands annoyed the crap out of me.

This book was in my freebie bag from last year's World Fantasy Convention. Ringo is known as a decent writer, and the title is the name of a Tarot card, which I thought might mean the story was Pagan-friendly.  Alas, it's not.

In the America that Ringo has created for this series (this is book two), there's a more-or-less clandestine organization for people with paranormal abilities who are called upon to fight, y'know, The Big Evil -- demons and the like.  On the side of The Big Good is Barbara Everette, Christian soccer mom and martial arts whirlwind. When she fights, she channels the power of the White God and turns into this unstoppable force.

Yes, Jehovah's called the White God -- even by the Pagans, who admit that He's much more powerful than the gods they follow.  Forget, for a moment, that I've never met a Pagan who believed that; it's Ringo's universe, and he can make it as unrealistic as he wants to.

Anyway. The book is set up in three parts.  In part one, Barbara is called to Chattanooga, TN, to work with the FBI in a battle against some demons. She also learns that her assistant Janea (an exotic dancer who's also a Norse priestess who follows Freya, because only a stripper would follow a sexy goddess like Freya, right?) has slipped into a coma due to interacting with some nasties; in part two, a bunch of Janea's friends must travel to a Dragoncon on some astral plane to rescue her. And then in part three, Barbara and Janea work together against some really nasty critters that threaten to destroy America -- prompting the President of the United States to tell every American that we all have to believe in God, or The Big Evil will win and we'll all die.  So yeah, atheists are in deep trouble. But not for long! All it takes to get them to convert is one look at Barbara in action!

Ringo writes a lot of military fantasy and it shows; the action scenes are well done. But I just can't buy his theology. And the whole Dragoncon sequence seemed to belong in another book entirely. I guess there's a "Warehouse 13" reference in the book, too, which I didn't get because I've never seen "Warehouse 13."

I guess I'm just not the audience for this book.
Posted by Lynne Cantwell at 6:00 PM