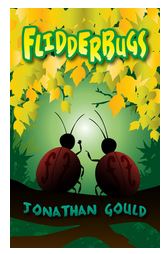 Flidderbugs is a kids' book that's more than that.

Kriffle is a bug who lives with his family and their fellow Triplifers on one side of the Krephiloff Tree.  On the other side live the Quadrigons. Triplifers and Quadrigons are involved in a longstanding quarrel over how many points a Krephiloff Tree leaf has, and the quarrel has defined the political debate in the bugs' Fleedenhall.

Kriffle's father is unable to attend the latest debate in the Fleedenhall, so he sends Kriffle in his stead.  In the process, Kriffle learns many things -- about politics, about the number of points on a leaf, and about the dangers of holding an entrenched position about anything.

I liked Gould's Doodling, as you know, and so I figured I'd like Flidderbugs, as well.  And I did think this book was cute, but I found the political satire perhaps a touch heavy-handed.  But then, I'm an adult, and so I'm not really the intended age group for this book.  I think a child wouldn't have a problem with it, and would probably very much enjoy Flidderbugs.
Posted by Lynne Cantwell at 6:00 PM