I hope you're not sick and tired of 9/11 commemorations yet, because I had to mention this book. 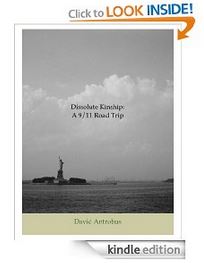 One of these days, I might write my own memoir of where I was on September 11, 2001, and how it affected my family and me. (The Reader's Digest version: I was already at work when the plane hit the Pentagon, having switched from bus to Metro there maybe half an hour before. My kids, at school just a few miles away, heard the boom.) But I don't know that I have anything profound to say about it, other than "I remember that."

Antrobus, however, does. He conceived of the trip as a way to come to terms with some trauma in his own life; serendipitously, he picked 9/11 as the date to begin driving from Canada's Pacific coast, where he lives, to New York City.  So he was not in the city when the planes hit the World Trade Center, but he arrived a few days later. He was the quintessential stranger in a strange land, having spent the previous week not glued to his television as the rest of us were, but driving across North America with his own thoughts and observations for company. And when he arrived, he found himself amidst kindred souls who had suffered trauma of their own. And so he listened, and watched, and hoped even the quiet ones would find a way to process what they had lived through.

Antrobus is a gifted writer. I found the book to be tough going in some places, but that was because of the subject matter and my own 9/11 experience, not because of the prose. The story of his trip back home I found to be somewhat anticlimactic -- but then, this is real life, where the plot isn't always resolved in the penultimate chapter, and "aha!" moments can't be programmed to suit.

In all, I found Dissolute Kinship to be a well-written, worthwhile read. I'm grateful to Antrobus for giving us the opportunity to see this seminal event through his eyes.
Posted by Lynne Cantwell at 6:01 PM