Full disclosure: I received an Advance Reader Copy of this book. Also, Brooks and Hise dole out the gruel, among other things, at Indies Unlimited. Neither of those facts affected my review. 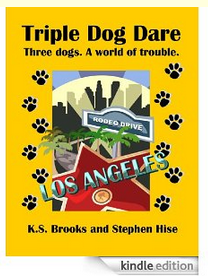 The subtitle for Triple Dog Dare is, "Three dogs. A world of trouble." That just about sums it up.  The story is in the tradition of the old screwball comedies.  Beautiful Bianca, a former journalist, is living in California with Lars, a fashion photographer with a shady past, and Lo-Lou, her West Highland terrier and their meal ticket.  Bianca only wants to write stories that will help people; instead, Lars has her writing children's books featuring photos of Lo-Lou (as well as a generous helping of Bianca's cleavage -- for the dads, you understand).

On the other side of the country lives Stuart Hockersmith, the milquetoast heir to his family's fortune and head of a major show dog competition. Lo-Lou -- more formally, Lord Louis Hockersmith -- is from his family's litter of show dogs.  Stu, smitten with Bianca, gave her the dog, in clear violation of the competition protocol -- and Stu's worst enemy is trying to use that to get the Hockersmiths thrown out of the show dog association.

Bianca realizes Lars has been lying to her about a lot of things; she leaves him and takes Lo-Lou with her, and in the process, gets into an accidental partnership with a photographer and former co-worker, Terri, who secretly hates her. Lars, now short of the dog he needs to clinch a possible film deal, picks up a badly-behaved Westie from the pound. And Stu tries to stave off his troubles by engineering a swap with Bianca of Lo-Lou for his runty brother, Lord Robert -- a.k.a. Lo-Bob.

Hilarity, as they say, ensues.

Triple Dog Dare is a delightful romp, with enough complications to keep you guessing until the very end.
Posted by Lynne Cantwell at 6:00 PM