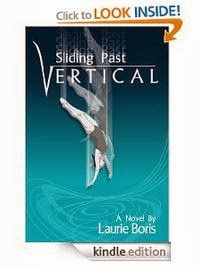 Laurie Boris is rapidly becoming one of my favorite writers -- and I say that not just because we're both on the Indies Unlimited staff, but because she's so terrific at what she does.

Her new novel, Sliding Past Vertical, is the story of Sarah, a young woman who screws up everything she touches, and Emerson, her best friend. Em and Sarah met in college at Syracuse; they dated for awhile, then split up. Sarah moves on with her life: she graduates and moves to Boston, where she works at a print shop and makes spectacularly bad choices in men. Em stays in Syracuse, where he works as an orderly in a hospice, writes porn for men's magazines, and not-so-subtly carries a torch for Sarah. Sarah always turns to him when the latest jerk breaks her heart, and he is always there for her.

When the most recent jerk turns out to be selling drugs and the print shop burns down, Sarah decides to take her long-ago diving coach's advice, and rewind her life to where she began to slide past vertical -- the point right before things went bad. So she moves back to Syracuse, into Emerson's spare room in the rooming house where he's lived since college. Em and Rashid, who also lives in the rooming house, drive to Boston to help her move. Rashid's parents back in India have picked out a wife for him, and he is happy to have the decision taken out of his hands. Until he begins to spend time around Sarah.

And of course, the druggie boyfriend and his "pals" manage to track Sarah down.

I admit I had a lot of empathy for Emerson; I too have been known to invest too much time in hopeless relationships. I don't want to spoil anything for you, but I will say that Sliding Past Vertical ends on a better note than any of my hopeless relationships ever did. It's not necessarily a happy ending, but it's a hopeful -- and hopefully older and wiser -- one.

***
Note: This review is based on an Advance Reader Copy.
Posted by Lynne Cantwell at 6:00 PM