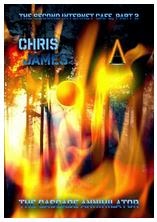 Lucas Hunter is back in this second installment of Chris James' sci-fi series, and he's still jumping back and forth between historical timelines. But see, that's his job. He's a dimension researcher -- someone who travels to parallel universes that have branched off from ours, to discover what might have been in our world if history had gone a little differently.

In the first book, The Dimension Researcher, Lucas ran afoul of a guy named Dietrich on one of his trips. Dietrich is from a timeline that would like to see the Second Internet Cafe shut down. In this book, Lucas and Dietrich cross paths again, but this time Dietrich is packing the ultimate weapon -- a cascade annihilator, which is a device designed to collapse realities and make alternate timelines disappear as if they had never existed.

While Lucas is chasing Dietrich across realities to thwart his nefarious plan, the Second Internet Cafe itself is under threat of defunding by the international coalition that operates it. Shutdown is imminent -- and that could strand Lucas in unfriendly circumstances. An analyst named Paula Featherstone gets involved in the fight to keep the facility open and its mission intact.

James knows how to build tension, that's for sure. The Cascade Annihilator had me on the edge of my reading chair for a good bit of the book. My one quibble: both Lucas and Paula tell their stories in first person, which is fine, but sometimes I had to read a little way into the chapter to figure out which "I" was narrating. However, it's not a fatal problem by any stretch of the imagination. I enjoyed The Cascade Annihilator and I sure hope a third volume is on the way.
Posted by Lynne Cantwell at 6:00 PM