Through the Door (The Thin Veil #1) - Jodi McIsaac 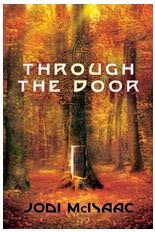 For the past seven years, Cedar McLeod has been going through the motions: raising her six-year-old daughter Eden and working as a graphic designer at an ad agency to keep a roof over both their heads. Her mother, Maeve, watches Eden while Cedar works. But Cedar has never gotten over Eden's father, Finn, who just up and disappeared before Cedar could tell him she was pregnant. One day, they're so in love -- and the next, poof! He's disappeared. No explanation and no goodbye.

Then one day, Eden opens her bedroom door and finds Egypt on the other side.

Clearly, something weird is going on here. And soon, Cedar begins to figure out what it is. I won't give you any spoilers, but suffice it to say that faeries are involved, and maybe Finn was forced to leave, and maybe Eden's cool magical gift has put them all in danger.

I said Cedar starts to figure things out soon -- but she could have gotten there sooner.To me, Through the Door seemed to go on a tad too long. The fae kept refusing to give Cedar their secrets, Maeve kept telling Cedar not to trust them, Cedar kept getting more and more worked up, and I came very close to wanting to throw something at all of them and tell them to get on with it, already.

Still, Through the Door is a pretty good read, particularly if you're into urban fantasies that feature the fae. Book 2 of the trilogy, Into the Fire, is available now, and the third book is due out in May 2014. I wasn't so enamored of Through the Door that I rushed out to buy the next book, but I expect I will probably read the whole series eventually.
Posted by Lynne Cantwell at 6:00 PM

Email ThisBlogThis!Share to TwitterShare to FacebookShare to Pinterest
Labels: Jodi McIsaac, review, The Thin Veil, Through the Door