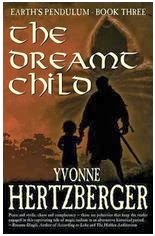 Fan of epic fantasy? Got a new Kindle? You could do worse than load it up with the three books of Yvonne Hertzberger's "Earth's Pendulum" series. And lucky for you, my friend, the final volume -- The Dreamt Child -- came out this fall.

Once again, we're back on the One Isle, where Earth is a character in her own right. If She ain't happy, nobody's happy -- which the people of Lieth learned to their sorrow two years previously. A political upheaval there threw the entire region into a drought, and the ensuing famine caused many to lose their lives.

But the ruling family of Bargia -- Lord Gaelen, Lady Marja, and their children -- have survived. And so has Liannis, their seer, and a particular favorite of Earth's. Seers historically have had no mates, but despite the tradition, Earth lets Liannis know that she is to join with (which is to say, marry) her manservant, Merrist. Luckily, the two like each other already, but Liannis has qualms. Earth seals the deal by giving Merrist the powers of a healer, thereby making him more or less an equal to Liannis and her power to truth-read and to see the future.

And Gaelen needs her. He is thinking of returning the neighboring demesne of Catania to self-rule. At the same time, the widow of the man whose mismanagement of Lieth precipitated the famine has petitioned Gaelen to let her rule the city as regent for her young son. Both Liannis and Merrist will need to ply their skills to bring about the outcome that's best for Earth -- which includes convincing the people to accept their own changed relationship.

I foundThe Dreamt Child to be a worthy final volume to the series.
Posted by Lynne Cantwell at 6:00 PM