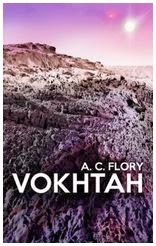 Vokhtah is a fascinating look into an alien culture -- and unusual because there's not a human character in the whole novel. This is no "first contact" kind of book, like much of classical sci-fi. Instead, it's a full-on immersion into life on another planet, where the dominant life forms are not at all humanoid.

The sentient species are of two types -- the Vohk, who rule the planet's day-to-day life, and the smaller iVokh, or healers. But the iVokh also act as a shadowy sort of check-and-balance on the Vokh: the iVokh's ruling council can decide that a particular Vokh is an abomination and arrange for its death. Yes, it; both the Vokh and the iVokh are hermaphrodites. Mating requires a fight for dominance -- which has obvious implications when a Vokh ruler decides to take over a territory adjoining its own.

As the book opens, the Blue -- a member of the iVokh ruling council -- is so troubled by a decision by the council to assassinate one of the Vokh that it abandons its seat on the council and goes undercover as a Messenger to try to put things right. This involves a dangerous journey with a group of Traders across mountains and desert -- one that taxes the Messenger to its physical limits -- as it races against time to beat the council's orders to their destination. It falls to one of the Traders -- a small but mysteriously powerful Vokh called the Apprentice -- to decide whether to help the Messenger survive.

It took me a little bit to get into Vokhtah. The reader is dropped into the world without the usual sci-fi trope of a human observer describing the new race, and so physical descriptions and explanations of the culture are left for the reader to discover during the course of the novel. But the characters' motivations are clearly explained and the book is well paced. There's even some humor.

If you don't mind a little bit of strangeness in your sci-fi -- and why are you reading sci-fi if you don't? -- then give Vokhtah a try.
Posted by Lynne Cantwell at 6:00 PM