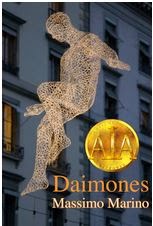 This book has a number of problems.

First, a quick synopsis: Daimones is set in and around Geneva, Switzerland. Dan works for a firm in Geneva, but he, his wife and his daughter live in a sort of exurb across the border in France. One day, he's fired from his job and goes home. A day or two later, there's some kind of weird windstorm that wakes him and his wife in the middle of the night; the next morning, they discover every other human in the world is dead. Or, to be more precise, nearly every other human -- there are survivors, but they are far-flung around the globe. Eventually, Dan figures out who caused this apocalypse, and how it ties into an incident from his childhood.

Now, the problems. The biggest one is the pacing. Marino spends the whole first half of the book describing, in too much detail, the family's efforts to stockpile supplies and arm themselves. It's only at the midpoint that Dan and his family learn of another survivor in Geneva. And contact with the aliens behind the apocalypse kind of comes out of the blue; it should have been foreshadowed much earlier in the story, especially since it turns out Dan has had contact with them before.

I also think Marino missed an opportunity with Dan's dismissal from work; it could have been much more than a plot device that allows him to be home when the apocalypse occurs. Dan never makes the connection that he was singled out at work for dismissal in the same way he's been singled out by the aliens for survival.

But also, he never goes through the typical emotional responses of someone who's been let go: anger that he was misunderstood, confusion about what happens next, concern about how to support his family, and, in Dan's case, a sick feeling of justification when he survives the culling and the morons who fired him don't. Numbness and depression are also common reactions to being fired. But Dan doesn't think about any of that, and his actions don't belie that he's feeling any of it, either; his biggest concern is the timing for telling his daughter.

Finally, I wish Marino had used someone whose first language is English to go over his prose. His English is good, but I ran across numerous instances where his word choice, while accurate in terms of definition, is not what a native English speaker would have used. The one that sticks out for me is "corpse." It's technically correct, but most people would say "body" or "dead body" instead.

In summary, I'd say Daimones is a science fiction novel with an interesting premise, but some problems in its execution.
Posted by Lynne Cantwell at 6:00 PM