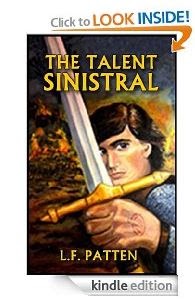 The Talent Sinistral is Patten's first book, and I hope it's the first of a series. That's how much I enjoyed these characters and the world the author has created for them.

Kier is a captain in the armed forces of Alcor -- a high rank indeed for someone with his mixed bloodline. He's the bastard son of a Tiernai noble, and his mother was Dynian, the race the Tiernai conquered upon their arrival in the Ten Kingdoms. Many Dynian have some magical abilities, and Kier is one of them. He trained with a Fithlon monk before assuming his military duties, and even now Gwythion contacts him on occasion.

And so it is as the novel opens. Kier, who is stationed abroad, is mulling over his latest message from Gwythion when he is set upon in the dark. His life is saved by a man who appears to be a Dynian adventurer -- but, surprise, JonMarc is a slave who believes he has never set foot in Alcor. Before long, Kier discovers the attack was not at all random, and in fact, it's related to the reason for Gwythion's summons.

Kier learns his father is near death, and begins the journey home to Alcor -- accompanied, at Gwythion's insistence, by JonMarc. This is epic fantasy, so of course a prophecy is involved, and the future of both the Tiernai and Dynian races hangs in the balance.

I enjoyed The Talent Sinistral. It's well-written and well-edited. If you're a fan of epic fantasy, I recommend it.
Posted by Lynne Cantwell at 6:00 PM