My Gentleman Vampire: The Undead Have Style - L.A. Lewandowski 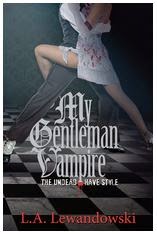 I have to say that this is the first book I've ever read that featured a tango-dancing vampire as one of the main characters.

Natalie, who's an author, is in the process of getting over Mike, the guy she threw out of her house after he cheated on her. One morning, after drinking herself to sleep the night before, she wakes up to discover someone has been through her closet and has laid out a chic outfit for her. Somehow or other, a stylish vampire named David has moved himself into her basement. He takes Natalie on as his personal project, and before long, he has renovated her diet, her health and beauty regimen, and even her house. And it turns out he is as much of a fan of the tango as she is. Pretty soon, the two of them are getting lessons from an unusual dance instructor so they can compete in the vampires' annual tango competition. Of course, there's a similar competition coming up in the human world, and Mike and his new partner are considered to be the dance team to beat. Anyone want to bet whether there will be a showdown?

I didn't completely buy Natalie's willingness to let David take over her life. Classical vampires use mind control to subdue their human companions, but David doesn't do that -- instead, Natalie just kind of goes with the flow. To his credit, he doesn't bite her, either. Oh -- and did I mention he's gay?

I don't typically read chick lit, but My Gentleman Vampire was a cute, fun book.
Posted by Lynne Cantwell at 6:00 PM