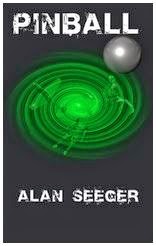 Steve Denver has kind of come unstuck in time.

One day, he looks up from his attempts to focus on writing his next novel, and sees some kind of metal monster heading for his home. He subdues it, more or less accidentally, and follows it to its source -- an interdimensional gateway that wasn't there the day before.

With a little ingenuity, Steve goes through the gateway and pilots through the green void on the other side, until he finds himself on another world. When he manages to get back home, he discovers more time has passed than he thought. You would think that would convince him to stay home -- but no, he's got to go back. And this time, the other world he lands in is not a welcoming place. How he gets back home again, and how his repeated efforts to set things right with his family after his time travels have mucked it up, make up the plot for the rest of Pinball.

Travel to alternate universes is a time-honored sci-fi trope, of course, and Seeger's book owes much to previous stories in this vein. But there's a good bit of humor underlying the gee-whiz technology in Pinball that isn't typically present in sci-fi (Kurt Vonnegut excepted), and I thought the humor added to the fun in this book.

I did think the early part, before the giant robot shows up, went a couple of pages too long. But in all, Pinball was a fun read.