The Sword and the Sorceror -- John R. Phythyon Jr. 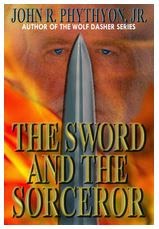 The Sword and the Sorceror is somewhat of a rare thing in epic fantasy these days: a hero's journey in which the hero isn't a young adolescent.

The book opens with Gothemus Draco's death scene. He's poisoned by Lord Vicia, a power-hungry member of the Council of Elders of Eldenberg, and his end comes at a dinner with the whole council, the other members of which are clearly okay with this. And why not? Gothemus is the most powerful wizard in the Known World, after all. And with him out of the way, they can seize the Eye of the Dragon, with which Gothemus has kept evil subdued, and rule the Known World their own way.

But as is usually the case, it's not just the council that wants the Eye of the Dragon. It was a gnome named Elmanax, who claims Gothemus stole the gem from him, who convinced Vicia to poison Gothemus. He wants the gem back so he can go home. And then there's Gothemus's brother, Zod the Fearless, who had always expected to rule the Known World with Gothemus just as soon as Gothemus finished fiddling with the legendary sword named Wyrmblade and turned it over to him.

But Gothemus has a son. And although Calibot rejected his father's legacy years before, Gothemus isn't done with him yet. Calibot has built a nice life for himself in the neighboring city-state of Dalasport; he's chief bard to Duke Boordin and has found happiness with a courtier/soldier named Devon. Then Gothemus's intern, the hapless Liliana Gray, shows up, with posthumous orders from Gothemus to turn over Wyrmblade to Calibot -- and the reader just knows nothing in Calibot's life will ever be the same.

I thought The Sword and the Sorceror was a light, fun read. My only complaint is the author's tendency toward over-description. For example, I did not need to be reminded every time Gothemus's name was mentioned that he was the most powerful wizard in the Known World.  But Phythyon resolves the various plot threads in an original and satisfying way. And hey -- dragons. What's not to like?
Posted by Lynne Cantwell at 6:00 PM

Email ThisBlogThis!Share to TwitterShare to FacebookShare to Pinterest
Labels: John R. Phythyon Jr., review, The Sword and the Sorceror